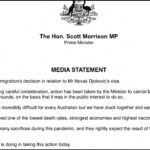 The Australian Open is scheduled to begin January 17th in Melbourne, the epicenter of Australia’s totalitarian COVID mandates.  Australia granted unvaccinated tennis superstar Novak Djokovic a visa to compete.  Australian border officials then attempted to block his entry and deport him because he was unvaccinated. Novak Djokovic took the issue to the federal court in […]