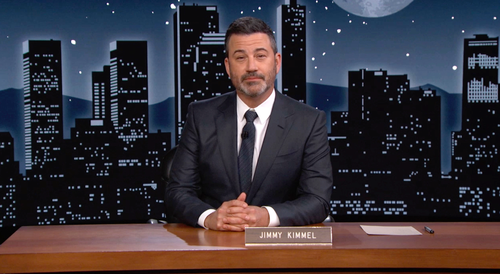 In a shirt reading, I CALL MY OWN SHOTS, Barbie drawls, “Bill Gates is the Antichrist!” The doll even “comes with a computer so she can do her own research!” (We see Barbie typing and twanging, “Sez here Moderna turns yer teeth Jewish!”). When you take Anti-Vax Barbie shopping, she attacks the cashier who demands she wear a mask, while another Barbie in a shirt reading PFIZER TELLS LIEZERS films the besieged worker and yells, “I’m reporting you, bitch, you’re going to jail!”

You can also take Barbie “to the stables,” where she’ll chug ivermectin! Moreover, the only “man-date” this Barbie cares about is “with her proud boyfriend Ken,” who wears a “Let’s Go Brandon” tee and can’t hear his Barbie-pal — the one dressed in JOHNSON AND JOHNSON IS SATAN AND SATAN shirt — because he’s listening to Alex Jones tell him the truth about monoclonal antibodies. The kicker is a hoot:

Mocking the hayseeds is always fun, but what a bonus, when you can jack off some of TV’s biggest advertisers at the same time!

The spectacle of posh celebs sneering at hicks who won’t take the jab has been compelling theater for a while now, especially since the smartypants act has often come packaged in outrageous errors. Whether it’s MSNBC’s Joy Ann Reid certainty” they can’t “spread it to you” (they can still spread it to you), the endless campaign of maladroit scolding almost seems designed to make fence-sitters refuse the shot out of spite, confusion, or both.

While the shame campaign has been a catastrophe as public health strategy, it has been effective as aristocratic misdirection, a way to keep the public’s eyes off the vault. Maybe that’s what it’s for.